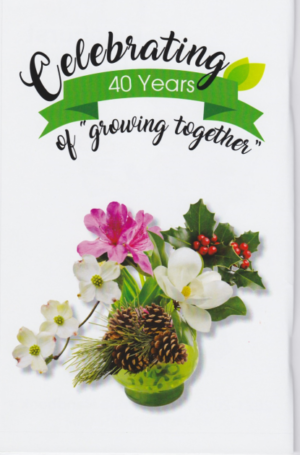 The Pinehurst Garden Club is organized for the purpose of encouraging home and community horticultural improvements. Since its founding in 1981, the Garden Club has participated in numerous village beautification projects, at both the Club and Branch levels. Our Spring Plant Sale is a fundraiser that supports community beautifications projects and funds a full scholarship for a worthy student in the Landscape Gardening Program at Sandhills Community College.

Founded in 1981 as the Dogwood Garden Club in the Village of Pinehurst, interest in the Club grew quickly. It became the Pinehurst Garden Club, with Dogwood becoming a branch, and it expanded to its current form with five branches, each with 24 members.

Since its inception, the Club has participated in numerous Village beautification projects, including decorating and planting, as well as supporting important civic causes. Members also volunteer their time to county-wide beautification and environmental projects.

In 1989, the Pinehurst Memorial Garden was established in the center of the Village. Initially, proceeds from the plant sales funded and maintained the garden. Although the Village now funds the garden, members continue to maintain it, with cleanup duties rotating among the branches. In 1991, the garden became a living memorial with creation of a fund to honor garden club members and memorialize friends, relative and loved ones. Those honored are recorded in a beautifully illustrated “Memorial Book.” Although donations no longer go to the Memorial Garden, PGC members and branches can make contributions to the book in memory of loved ones. The book is located in the Tufts Archives of the Given Memorial Library.

In 1987 the Club began its annual plant sale fund-raiser with the sale of mums and pansies. The sale expanded to its current form in 1992 when the inaugural spring sale began. The sale provides funds for major projects, including the scholarship program which began in 1997.

Our club has five branches that meet independently each month between September and May. Residents of Pinehurst are welcome to join. If you are interested in joining, contact a current club member or Marcia Kuzniar (910-315-2007), the club membership chair. A membership application is available by clicking the button below.